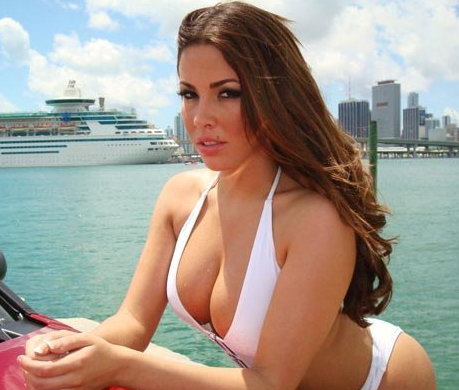 Nayer Regalado better known by the mononym Nayer (sometimes stylized as NAYER!), is a Latin pop singer. She is known as being a featured artist along with Ne-Yo for Pitbull’s 2011 hit single “Give Me Everything”, produced by Afrojack. She is also known for her hit single in 2012 titled “Suave (Kiss Me)” featuring Pitbull and Swedish-Congolese singer-songwriter Mohombi. She also was featured by Enrique Iglesias in the Remix of his single “Dirty Dancer” along with other artists, such as Lil Wayne and Usher.

Nayer is Cuban. Both of her parents were born in Cuba and her mother has some Lebanese (Arabic) ancestry. A native of Miami, Florida, she began a singing and acting career at the age of 7.

Nayer has appeared in numerous ads, commercials, soap operas, carnivals, foundations, charity events and TV programs. She has participated in a major talent competition named “Star Search” and she has also appeared in television show Sábado Gigante, and in a show called La piñata loca (broadcast through Univision). Supported by her parents, she moved to Los Angeles when she was 14, to record a six song demo. After shopping the demo to labels, Nayer secured a major recording deal at Miami-based and Latin music-oriented Sony Discos which was looking for a voice for a new track called “First Kiss (Primer Beso)”. Recorded by Nayer at the age of 16, produced and remixed by DJ Fluid in both English and Spanish, “First Kiss (Primer Beso)” is a dance song, and climbed dance music charts soon after its release in June 2002 hitting the Billboard Top 40 Dance Charts. However, due to business reasons, Nayer’s debut album was never released.

Nayer was discovered by Cuban-American rapper Pitbull in 2009 whom she had the opportunity to do a collaboration with a few years back while signed to Sony. She immediately got in with producers and started working on her music & song-writing, while in the process she appeared on various videos of the rapper from his albums Rebelution (2009), Armando (2010) and Planet Pit (2011), such as “I Know You Want Me (Calle Ocho)” and “Shut It Down” (feat. Akon). She then did a joint venture with RedOne who quickly believed that he saw the Star quality and the “IT” factor in Nayer, “She’s a Superstar!”.

In 2013, Nayer was featured on Enrique Iglesias’ single “Dirty Dancer (Remix)” along Usher and Lil Wayne, and she held a cameo appearance in Enrique Iglesias’ “I Like How It Feels” music video. She was also a featured artist on Pitbull’s smash “Give Me Everything”, along with Ne-Yo and Afrojack. The song topped charts at #1 worldwide for consecutive weeks, giving her the opportunity to perform in such shows like “Dancing With The Stars”, American/Latin Billboards, “Tonight Show” with Jay Leno, the MTV Music Awards, Premios Juventud (Latin), Jimmy Kimmel Show, All Star NBA Halftime Show and many more. Nayer was also nominated in 2012 for MTV Video Music Award as Best Collaboration, and up for four Latin Billboard Nominations in 2013 with “Give Me Everything”, being the 2nd female to have the most Nominations.[1] In Sep 2012, the singer released her single, a song titled “Suave (Kiss Me)”, which features Pitbull and Swedish-Congolese singer Mohombi.[2][3] Her single topped Billboard charts with #1 in Turkey #1 in Morocco, #3 in Germany, #2 in Sweden, #1 in France, and Top 20 in Canada. She then joined as opening act Enrique Iglesias and Pitbull on the “Euphoria Tour” across the U.S Europe and Canada. Nayer is working on her debut album with RedOne, and other producers has just finished the Euphoria tour with Pitbull and Enrique Iglesias. Nayer was featured in the official remix of Fonseca’s single “Eres Mi Sueño” alongside Spanish rapper Maffio. During an interview at the 2013 Billboard Music Awards Nayer mentioned she has collaborated with multiple artists and is currently recording new music.

In 2016 Nayer decided to tap into the Latin culture, she is currently recording in Spanish. She is preparing to release her Latin/Spanish single summer of 2017. This time sticking to her Latin background and Cuban roots.