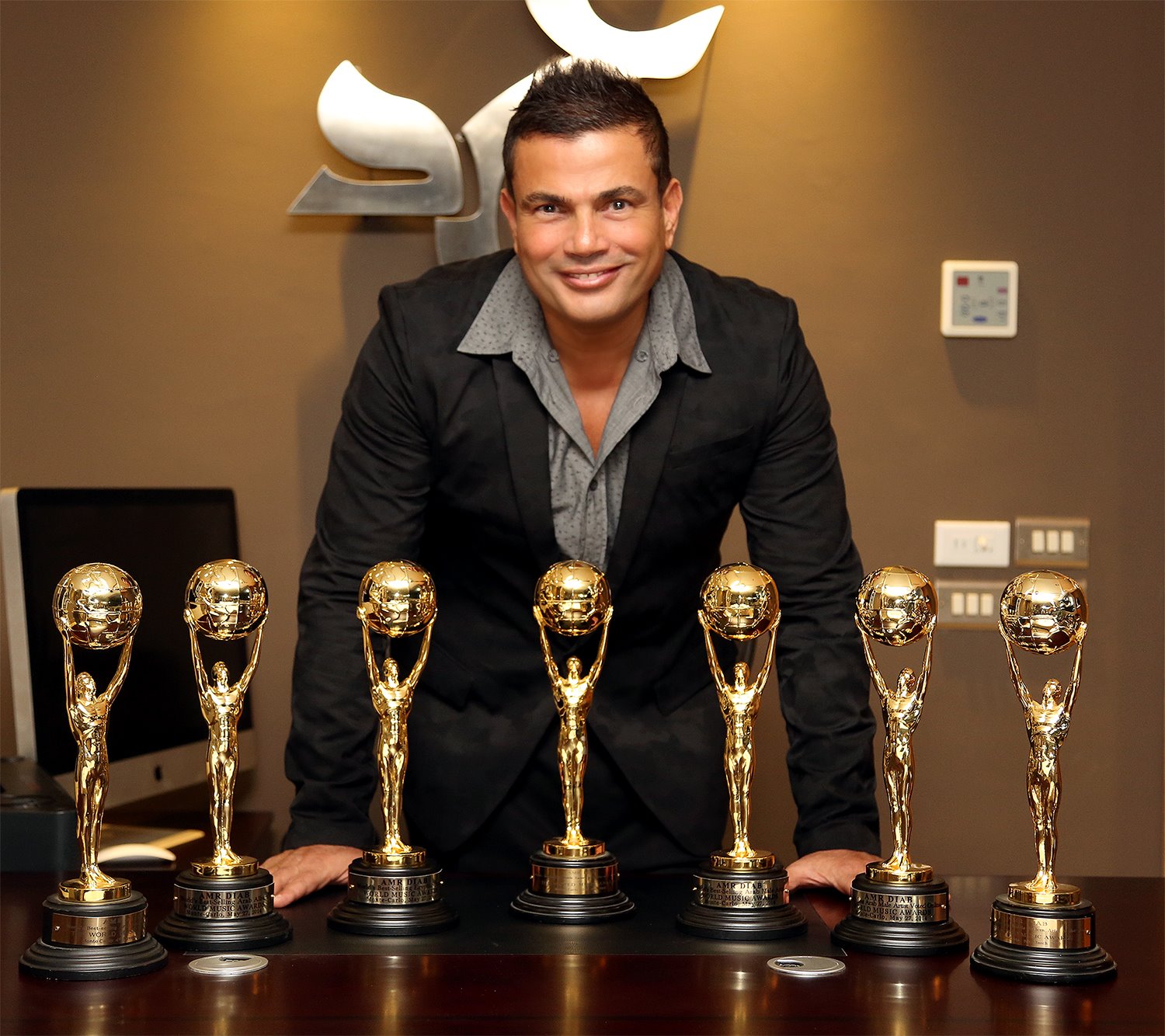 Amr Diab was born on 11 October 1961 in Port Said, Egypt into an artistic family. His father, Abdul Basset Diab, worked for the Suez Canal Corporation and was the chairman of Marine Construction & Shipbuilding in the canal. Diab’s father played a huge role in igniting the early sparks of musical inspiration towards Diab’s early stages in his professional music career. Diab, at the age of six, had his first shot at fame when he sang the Egyptian National Anthem “Bilady, Bilady, Bilady” at the annual 23 July Festival in Port Said. As a result, he was rewarded with a guitar from the governor of Port Said, and began to become recognised nationally. Diab graduated with a bachelor’s degree in Arabic Music from the Cairo Academy of Arts in 1986.

In the summer of 2004 Diab, having left Alam El Phan, released his first album with Rotana Records, Leily Nehary, which he followed up with the hugely successful Kammel Kalamak (2005), and El Lilady (2007). September 2011 saw the release of his album Banadeek Taala, produced by Rotana. In February 2011, Amr Diab released his hit single “Masr Allet” (Egypt spoke). In 2012, Diab hosted the first Google Hangout in the Middle East during his performance in Dubai. In October 2014, Amr Diab released his album “Shoft El Ayam” which topped his last album “El Leila” and again became the best selling album in Egypt in iTunes and Rotana. In July 2015, Amr Diab released the music video from his song “Gamalo” from his album “Shoft El Ayam.”in March 2016 he released his last and current album “Ahla w ahla” which was produced for the first time by “nay records”, after leaving rotana records.

In December 2016, the organizers of Amr Diab christmas concert in Cairo announced veiled women are banned from attending the show because alcohol is served.[5]

Diab is an active fitness enthusiast. Diab is well known for his intense body building. Diab was married to Shereen Reda, from 1989–1992, ending in a divorce. They have one daughter, Nour, who became known through the song, “Habibi Ya Nour El Ain.” Diab is currently married to Zeina Ashour, with whom he has three children: Abdallah, Kenzy, and Jana.

On September 28, 2016 Diab announced that he achieved A Guinness World Records title for Most World Music Awards for Best Selling Middle Eastern Artist

This album is produced by NAY company

The album consists of 12 songs.

Diab is one of the first singers to popularize music videos in the Arab world and the first Egyptian singer to appear in music videos.[4][dead link]

Diab’s fame in the music industry has led him to experiment with other forms of media, such as film. Amr played himself in his first film, El Afareet, which was released in 1989. It also starred Madiha Kamel. His second film Ice Cream in Gleam (Ays Krim fi Glym), in which Diab starred in 1992, was chosen as one of the best five Egyptian musical films by the UCLA School of Theater, Film and Television. The film was featured in the UCLA Film and Television Archive’s new program “Music on the Nile: Fifty Years of Egyptian Musical Films” at James Bridges Theater at UCLA on 6, 8 and 10 April 1999. David Chute of the Los Angeles Weekly termed it “observant” and “a big leap”.[12] His third movie was released in 1993, and was named Deahk We La’ab (Laughter and Fun). The film premiered in the Egyptian Film Festival in 1993. Amr played alongside international Egyptian movie star Omar Sharif (Lawrence of Arabia, Doctor Zhivago) and Yousra. Overall, Diab did not experience the same level of success in film that he had with his music career. Since 1993, Diab has focused on his singing career.

During the 2011 uprising, some protesters criticized Diab for staying silent, and for fleeing Egypt for London.[13] A few days after former President Hosni Mubarak stepped down, Amr Diab composed and sang a memorial song, “Masr A’let” (Egypt Said),[14] and released it in conjunction with a music video showing pictures of the martyrs who died in the uprising. He initiated a charity campaign “Masry Begad” (“Truly Egyptian”), a social national program aimed at serving and rebuilding Egyptian society. His online radio station Diab FM often presents talks and discussions about what the Diab FM team can offer to the community as well as applying it practically by being present in different sites across Egypt with a new humanitarian project each week.[15]

Amr Diab’s songs have appeared in several films, including:

His common shortened name, Amr Diab, is pronounced in Egyptian Arabic as [ˈʕɑm.ɾedˈjæːb]